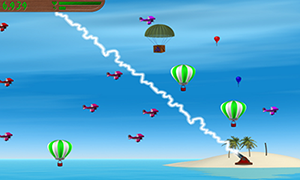 Ah, the South Pacific seas... warm sun, clear skies, crystal waters... could you ask for anything more? Why, yes, add two islands obsessed with destroying each other's palm trees and you've got yourself one explosive recipe for fun!

Island Wars is a Competitive Multiplayer Shoot 'em Up, developed by InterAction Studios for the PC in 1999. It's split into three rounds, where each player has an island with three palm trees on them, and each round is split into three phases. In the morning, the attacking player controls an aircraft that will attempt to bomb the defending island's palm trees, while the defender uses a cannon to shoot it down. At noon, it goes vice versa. In the evening, both players control planes that will try to shoot each other down instead. At the end of 5 days, the player with more points wins.

A sequel, Island Wars 2 was released in 2006, with new game modes, more powerups, and better graphics. The new Co-Op Multiplayer Invasion Mode pits one or two players sharing an island, where an invading force is attempting to destroy the island's palm trees. The first game can freely downloaded here

, and a sequel can be bought at the same place.

The first game has also been ported to the iOS and Android devices in 2011, with the sequel following a year later.

This series contains the following Tropes: