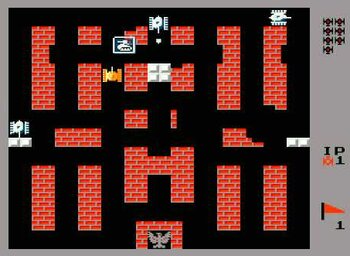 Battle City is a series of four-directional shooters developed and released by Namco, featuring tanks. This series features several games:

In these games, the player spawns right next to their base, represented as a bird. The enemy tanks start appearing from the edges of the screen and moving semi-randonly towards your base. To win the round, all enemies in the level have to be defeated. Game over is not only when all lives are lost, but also if the enemies (or the players, either by accident or on purpose) manage to shoot the base down.

Namco has also released Shingun~Destroy! Girl's Tank Battalion in 2014, which is sometimes considered to be part of this series, though aside from its title and having tanks in it, the game has little to do with any of the aformentioned games.

This series wasn't quite popular, with the exception of Battle City, even then, it was most popular in places where it wasn't officially released. Along with Road Fighter, its almost impossible to find an unlicensed multicart that doesn't have this game on it. It's even gotten to the point where unofficial remakes have been made for clone systems.