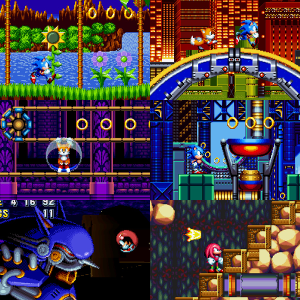 A gamer in the 90's would never believe these screenshots all came from a single game.note In standard reading order: Sonic in Green Hill Zone; Sonic and Tails in Chemical Plant Zone; Tails in Hydrocity Zone; Sonic in Metallic Madness Zone; Mighty facing Metal Sonic; Knuckles in Lava Reef Zone.
ToeJam & Earl: Back in the Groove! is a mash-up of the very best features of the classic console games with a ton of funky fresh improvements!
— Steam description of Toe Jam And Earl: Back in the Groove!
Advertisement:

What the Final-Exam Boss or the All The Worlds Are a Stage final level is for a video game, the Megamix Game is for a series. It cherry-picks recognizable content from every preceding entry in the series, mashes them all together in an entertaining way, and perhaps adds some new content to keep it all fresh. For these titles, the Nostalgia Level is the rule, not the exception. This is common to find in Fan Games and ROM hacks that pay tribute to a series' history.

Supertrope of Dream Match Game, which is specifically for fighting games in which the fighters are the returning content. Frequently overlaps with Milestone Celebration. In some cases, creators make these installments shortly before considering or preparing a new overhaul for the series.