Video Game / The Battle of Olympus 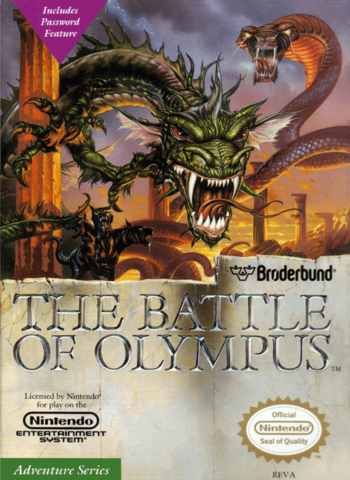 A cover art so awesome that the game will inevitably be a letdown.
Advertisement:

The Battle of Olympus is a video game developed by Infinity and published by Brøderbund Software, released in the US in 1990 for the NES and on Game Boy in Europe. It's a side-scrolling adventure game based on the Greek story of Orpheus and Eurydice; the heroine in the game is referred to as Helene instead.

The story is that Helene has fallen victim to the bite of a poisonous snake and has been taken to Hades. Orpheus rushes to her rescue upon hearing of this. The game combines many different Greek legends, culminating in monsters and items that are found throughout Greek mythology.

The Battle of Olympus contains examples of: