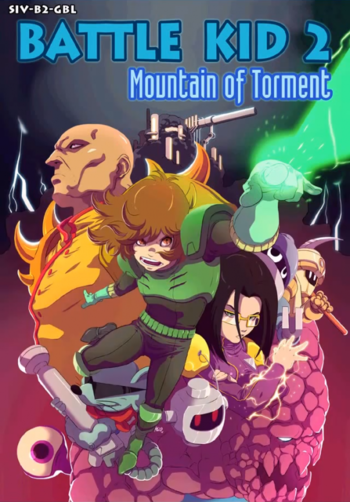 Battle Kid 2: Mountain of Torment is an NES game made by Sivak Games, as the sequel to Battle Kid: Fortress of Peril. Like the last game, Battle Kid 2 is an honest I Wanna Be the Guy, minus the Platform Hell. Like the first game, every death is your fault, not the game's. It uses a ten-character password system (unless you're on Hard or harder), has the same Metroidvania gameplay of the first Battle Kid, and boasts "over 650 rooms, 25 enemy types, 13 boss battles, 42 music tracks, and more bonus features this time around."

The plot picks up almost exactly where the first game left off. After One-Hit Point Wonder Kid Hero Timmy infiltrates the Fortress of Il'Akab, he finally manages to destroy the supermech. Although a majority of the ones behind it got away, Timmy does manage to capture one of them, Chester Donovan, and bring them back to Disch Corp, where Timmy's friend Dr. Tina Byers administers a Truth Serum that slowly drives Chet to madness, and he finally talks, revealing the contingency plan he had mentioned back at the Fortress. It is discovered that the other two people behind the supermech, Helga Kraftie and Ivan Mekanovich, are building a mega cannon at the Shoh'Mec Mountains, which Timmy must stop again.