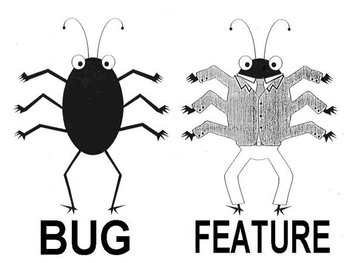 "What's the difference between a bug and a feature?"
"Marketing."
— Unknown

If a Good Bad Bug is particularly liked by fans of a game, it might be upgraded to the status of a legitimate feature in a sequel, update, or expansion. This is a refreshing attitude from game developers, who otherwise tend to take a zero-tolerance approach to the squashing of bugs—the exact opposite of the attitude usually taken by fans.

Of course, bugs that break the game balance usually aren't eligible for this, unless the game is rebalanced to accommodate them. Game Breaking Bugs are never eligible, of course, owing to making the game unwinnable. No-one likes those bugs.