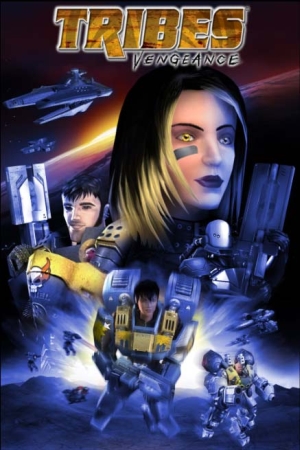 Tribes: Vengeance is a First-Person Shooter with elements of Vehicular Combat, set in the universe of the Tribes series but a few thousand years before the core installments.

The story takes place at the dawn of the Tribal Wars between the Galactic Empire and the "tribals", population of the fringe planets seen as barbarians by the Imperial citizens. The game opens with an attack on the spaceship carrying the Imperial King's daughter Victoria by members of the Children of Phoenix tribe. Victoria is captured by Daniel, a Phoenix clan leader, who holds her for ransom and, along the way, shows her how the tribesmen really live and die. Before long, she develops a bad case of Stockholm Syndrome and convinces her captor to return her to her father, as an act of goodwill to start searching for a diplomatic solution to the long-standing conflict between the Empire and the tribes.

Fast-forward about twenty years into the future. An anti-Tribal extremist Julia (who is actually Daniel and Victoria's daughter) makes life hell for the tribesmen—which reflects the popular Imperial attitude all too accurately. Victoria and Daniel are nowhere to be seen, but Daniel's brother Jericho is still out there, and Julia is after his head for personal reasons. There is also a mysterious cyborg assassin, a Diabolical Mastermind, and the nasty chief of the Blood Eagles tribe, all wrapped up in the same mess. And, of course, the story of Victoria and Daniel is not over yet, so we will keep jumping between Past and Present a couple more times before it's all over.

Vengeance was developed by Irrational Games based on the Unreal Engine and published by Vivendi in 2004. Although met with good critical reception, the game was plagued by Vivendi's refusal to support it, including cancellation of the much-needed patch 1.1. As a result, it left a whole lot of players dissatisfied, placing the future of the Tribes series in question for the next six years.