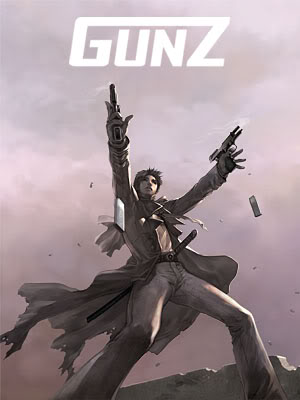 "Oh, shit. Um. Uh. Sorry. Guys, you mind waiting while I pick those magazines back up?"
Advertisement:

GunZ: The Duel is a freeware Third-Person Shooter developed by Maiet, and designed to play like Hong Kong Gun Fu scenes. The basic idea was that every character was a badass action movie hero that shunned the law of physics and carried an arsenal that could put any armory to shame, wall-jumping and wall-running and diving to the side while unleashing it all on the opposition who dared to defile you.

On the surface, the game appears to be a standard multiplayer online shooter and that is what the developers initially intended it to be. However, as soon as the players started finding exploits in the system, people promptly started developing these into a metagame, and others started discerning techniques of how to counter these glitches. These techniques developed into "styles", and there are three that are most commonly recognized by the players:

In addition to the varying modes of deathmatch, there is the cooperative Quest Mode which has up to four players against increasing waves of enemy monsters in small parts of existing multiplayer maps.

The sequel GunZ 2: The Second Duel

, strangely enough, was never officially released in Korea, but only in the US and Europe. As of May 10, 2017, only the US server still operates.