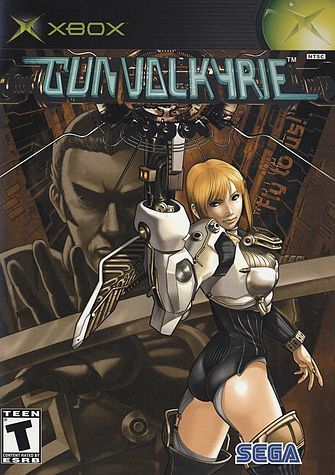 GunValkyrie is a 3rd person Action-Adventure and Platform Game developed by Sega's late Smilebit Corporation, released on the 5th of June, 2002 for the original Xbox Console.

In the game, players take the role of two elite space agents as they battle against giant insects on a desolate planet while searching for the scientist responsible for them. Unlike many others of the genre, despite the unique and utterly inexplicable mashup of gameplay mechanics, GunValkyrie is remembered mostly for its unorthodox (if not polarizing) control scheme, steep learning curve, and a play style that encouraged players to stay airborne at all times and fire down on enemies, as opposed to walking and shooting on foot. Unfortunately, most players didn't realize this unless they watched the game's demos or figured it out themselves.

Designed initially for the Sega Dreamcast, GV was to employ a groundbreaking controller/light-gun combination control scheme, but Sega's fall from the hardware market resulted in the game being shifted to the Xbox. While the game benefited from very attractive graphics, the light-gun idea was abandoned and a new control scheme was implemented, where moving efficiently relied on clicking the control sticks in different directions, and the triggers were used to jump and fire weapons. The face buttons were only used to switch between weapons and the A button wasn't even used. While the control scheme was largely criticized, many of those who got over it found themselves in for a challenging treat.

Narratively, GV relied on cutscenes and text briefings to relay the core mission aspects. Within the game itself, a number of devices were masterfully employed within various levels to effect haunting, atmospheric, subtle, ambiguous, and highly disturbing revelations. Not to mention that enemies were incredibly aggressive, large, and packed in groups.

As for the story, the game takes place in a Sci-Fi Steampunk Alternate History setting, where it was discovered that certain individuals exposed to Halley's Core, derived from Halley's Comet, gained superhuman abilities. These people would be known as "Halley's Chosen". Among those was Dr. Hebble Gate, who was exposed to the comet while in his mother's womb in 1835, and was born with a superhuman mind. In 1870 he learned to harness the powers of Halley's Core and gave birth to revolutionary advancements in technology that locked the world in an era of advanced Steampunk technology and British imperialism forever. Hailed as a genius with power and influence over every industry, even political and military affairs, he also founded the GV organization, comprised of other Halley's Chosen to combat against those who might misuse its technology.

Then in 1906, a bunch of colonists disappear on the planet of Tir Na Nog, and -by sheer coincidence, surely- a bunch of gigantic-mutant-super-powered space bugs show up. The good Doctor had already been missing for four years, which resulted in widespread shock and panic throughout the world. Seeing a connection between the two incidents, two members of an elite force within GV, "Team Dolphin" are sent to investigate: Kelly O'Lenmey, born in Ballymun, Ireland, who once aided the Irish Republic in their fight for independence until their methods proved too much for her and left for GV, and Saburouta Mishima, born in Kyushu, Japan, a space Samurai of the Meiji Restoration who was unjustly sentenced to capital punishment and saved by GV. Leading them is Gate's only daughter, Meridian Poe, who is desperate to stop her father after he surgically removed her head and ran off with her body. Together they seek to track down Dr. Hebble and find out the truth behind what's going on.

Compare the then-recent Starship Troopers, which many players and critics compared the game to since it also involved shooting giant insects on a desolate planet, as well as the novel. Also compare and contrast Nintendo's Metroid, which also features an armed and armored female protagonist shooting alien creatures in space, although with a stronger emphasis on ground exploration.