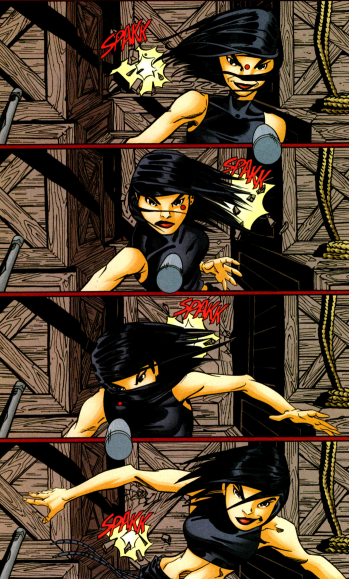 Dr. McNinja: The problem with your gun is you have to point it where you want to send the bullets, and I can see that.
Frans Rayner: The bullets are supposed to be faster than you and you know that!
— The Adventures of Dr. McNinja
Advertisement:

A character who can stroll into the middle of a firefight and emerge unscathed. Guns Are Worthless against them. They aren't Immune to Bullets, but they're so fast they might as well be. If you shoot at them from any farther than point blank range, they'll jump out of the way, or use some impressively small object to deflect the bullet, Improbable Aiming Skills be damned. We're talking about literal bullet dodging here, not those moments when someone manages to avoid taking part on something disastrous or shameful.

Sometimes this skill is imparted by a background in Gun Fu, Gun Kata,note dodging lines of fire before the shot Implausible Fencing Powers, or Super Reflexes. Maybe the enemy was Point Defenseless? For maximum coolness, show off the dodging in Bullet Time. See also Could Have Been Messy. More Dakka may be employed to attempt to overcome this. Compare Deadly Dodging. Also compare Bullet Catch, which is even cooler, and Catch and Return, which takes this to its logical extreme. Contrast Bullet Dodges You. When you upgrade from bullets to missiles, High-Speed Missile Dodge is the result.