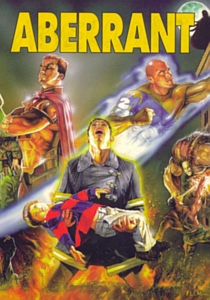 Aberrant is a role-playing game created by White Wolf in 1999, set in 2008 in a world where super-powered humans started appearing one day in 1998. It is the middle setting in the greater Trinity Universe timeline, chronologically situated about 90 years after Adventure!, White Wolf's Pulp era game, and over a century before the psionic escapades of Trinity/Æon. The game deals with how the players' meta-human characters (called "novas") fit into a mundane world when they most definitely are not mundane, as well as how the mundane populace react to the sudden emergence of novas. The original Aberrant product line was discontinued in 2002, though a d20 System version was released in 2004. A new edition was announced in 2012 from Onyx Path Publishing, who'd bought the rights to the Trinity Universe games, eventually given the name Trinity Continuum: Aberrant. A successful Kickstarter ran in 2019, and has been released to the public as of June 2021.