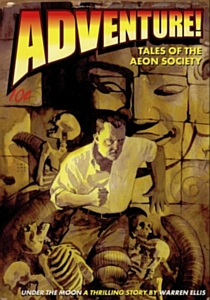 Adventure! is the third game in White Wolf's Trinity Universe, and the earliest chronologically, emulating the Golden Age pulp adventures. A single corebook was released in 2001, with a d20 version in 2004. A new edition, Trinity Continuum: Adventure!, is currently in the works.

In 1922, Doctor Calvin Hammersmith publicly demonstrated his Telluric Engine, a device capable of drawing energy from space-time itself. Something went wrong during the course of the demonstration, and the machine exploded, starting a fire that burned down the laboratory and killed Hammersmith.

The explosion also unleashed a wave of strange energies through space-time, so-called "Z-rays", which, among other effects, granted certain people extraordinary abilities. The people so empowered became known as the Inspired.

The year is now 1924. A new world has opened up for the Inspired, one stranger and wilder than they could have imagined, and they dive into it with gusto.

for Trinity Continuum: Adventure! was held in 2021.