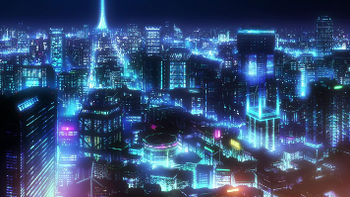 Post-Cyberpunk is the reaction to the apathetically bleak setting of Cyberpunk. Of course, Post-Cyberpunk involves reconstruction of concepts Cyberpunk deconstructed, or deconstruction of Cyberpunk Tropes (such as the Dystopia). The Cyberpunk genre itself was meant as a reaction to utopian fiction popular in the 1940s and 1950s while exploring technology's possibility for abuse 20 Minutes into the Future (tech from Star Trek will just result in Brave New World), but as the genre itself got so Darker and Edgier to the point of being just as unrealistic, it was predictable that Cyberpunk itself would get a deconstruction.

What the old and new Cyberpunk genres share is a detailed immersion in societies enmeshed with technology. They explore the emergent possibilities of connectivity and technological change. What Post-Cyberpunk has that separates it from pure Cyberpunk works is an emphasis on positive socialization. In Lawrence Person's "Notes Toward a Post-Cyberpunk Manifesto"

he describes typical Post-Cyberpunk protagonists as "anchored in their society rather than adrift in it. They have careers, friends, obligations, responsibilities, and all the trappings of 'ordinary' life." For this reason, character goals also differed characteristically, "Cyberpunk characters frequently seek to topple or exploit corrupt social orders. Post-Cyberpunk characters tend to seek ways to live in, or even strengthen, an existing social order, or help construct a better one." In other words, there is a notable absence of 'punk' elements as found in most other Punk Punk genres. And in recent years several works that rely heavily on the post-cyberpunk conventions and tropes and have a strong post-cyberpunk atmosphere managed to drop most of the 'cyber' aspects as well. (See Inception and Mirror's Edge as examples.) Just like it's mentioned in the Cyberpunk article, Post-Cyberpunk heavily deals with Social sci-fi in accordance with Asimov's Three Kinds of Science Fiction, but its portrayal of technology is more neutral than Cyberpunk's, and sometimes it's downright positive. While Cyberpunk focused on technology going beyond our control and dooming us all, Post-Cyberpunk states that humans cause technology to go awry, and that responsible use of technology could actually bring us to a new age. Simply put, Post-Cyberpunk basically reins in Cyberpunk's excess and tries to give us a more open vision of the future.

Aside from this main difference, the two sister-genres share many themes, tropes and story elements to the point that many question the legitimacy of this genre as separate from Cyberpunk, and contend that Post-Cyberpunk is simply Cyberpunk expanded beyond its base and taken further logically. Purists, however, see a definite difference.

As with mainstream punk culture, the cyberpunk movement (and it really did start as a serious Anarchist socio/political movement as in the 1986 Cyberpunk Manifesto) got Lost in Imitation which emphasized stylish elements over substance. Pop-Cultural Osmosis pushed the visual aspects of cyberpunk over the deeper meaning of the cyberpunk movement. Ironically, Blade Runner, the film that established the Ur-Example of the cyberpunk look, did not have significant cyberpunk themes (such as hackers, cyborgs, and cyberspace). It was a futuristic noir film that approached the often-approached What Measure Is a Human? theme. But the slick, cynical Neo-Noir style along with the background extras wearing mowhawks, black leather, sunglasses, Asian fetish, and other tropes that would eventually make it into The Matrix trilogy remain the chief identifiers universally associated with cyberpunk. While the actual subculture punks did don signature looks, they were eventually outnumbered by posers who like to dress the partnote Often they will dress in a way that exaggerates the look of the real exponents who are typically far more subtle, at least in public but don't care about or understand the philosophy or lifestyle. The exponents of the original Anarchist cyberpunk movement were apparently not into costuming and insisted that a cyberpunk can and does look like anyone.note It is worth noting that the protagonist of Blade Runner (and the book it is based on), Rick Deckard, was not a punk or social misfit, but, being a police officer (or bounty hunter as in the book), an adult member of the conservative establishment.

The Post-9/11 ideological atmosphere of 21st Century America also saw a marked decrease in heroes who were decidedly anti-establishment. Despite the dystopian nature of cyberpunk settings, it was frequently assumed that race, gender, nationality, and sexual orientation would be non-issues in the future, the rationale being that the last generation that really cared would have almost died out by then (even racially homogeneous Japan is often depicted as a melting pot in the future). However, now that society is in the chronological era that the majority of cyberpunk depicted, issues surrounding identitarian politics are still not only alive but even more volatile than ever, threatening to make society more divisive. As a result, Post-Cyberpunk is often required to shelve more futurist themes and focus on existing social issues that have carried over from the past millennium. Additionally, it is far more difficult (bordering on impossibility) to operate anonymously or in the shadows outside of the system (the "Punk" aspect of Cyberpunk) or under dual/false identities. The increase of security profiling, monitoring, hidden surveillance and current forensics technology is making it less and less possible to move around without leaving fingerprints or footprints of some type, digital or otherwise. And today, there is now the understanding that there is no anonymity or privacy on the internet.

Basically, if you have a Crapsack World modelled on 1984 and/or Japanese Zaibatsu where (most critically) technology is a method by which the power elite control the people, and the protagonists are entirely against said society, you have traditional Cyberpunk. If, however, you have a world that has some redeeming features, is not controlled by the State and/or Mega-Corp, technology isn't screwing everything up, and the protagonists are trying to fix social problems from within rather than rebelling against society from without, you have Post-Cyberpunk. Of course, there is plenty of overlap.

In Japan, the tropes that would make up Post-Cyberpunk have been a part of their science-fiction worldview since as long as anime have existed, predating Cyberpunk itself. The incredibly influential Astro Boy portrayed technology as having the potential for both great good and great evil from the very beginning, and the Punk Punk elements were largely imported later and were never quite as popular in Japan as they were in the United States.

Compare Cyberpunk, Cyberpunk for Flavor, Punk Punk, and Postsomethingism. See Cyberpunk Tropes for tropes found in Post-Cyberpunk works and shared with its cousin Cyberpunk. Also compare to Solar Punk: both were created as reactions to Cyberpunk, but came to different conclusions — Post-Cyberpunk says "the future sucks so we will redeem it", it accepts the world we live in and the systems that support it (industrialization, corporate globalism and resource exploitation), but adapts them to be less harmful; Solar Punk says "the future sucks so we will replace it", it rejects the Cyberpunk vision entirely and presents a new vision built around small communities, sustainable ecology, artisan craftsmanship and social anarchism. Unlike Cyberpunk, which may ascribe to Science Is Bad, Post-Cyberpunk and Solar Punk are more likely to ascribe to Science Is Good — or at least, science can be good if not abused.

Not to be confused with Post-Punk, which is a music genre based on New Wave Music.