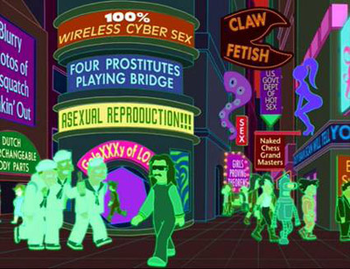 "Didn't we have to pay a $9.99 subscription to get in this part of town?"
"Nah, Zoidberg's got a lifetime pass. He's in Claw Fetish right now."

What is the Metaverse?

The short answer: "It's the Internet, except you can walk around in it."

The trope answer: The Internet becoming Cyberspace for real and everyone knowing about it and interacting with it that way.

The advent of Second Life and its open-source equivalent, Open Simulator, may make this future arrive sooner than you think. Some might argue that it already has, what with real-world governments and businesses setting up shop in Second Life, people making real-world money entirely within Second Life, and successful experiments at teleporting avatars between the Second Life grid and various OpenSim grids. However, with the drastic dulling of the use of these services, the concept fell by the wayside for years... until projects like Oculus Rift and Janus VR

started bringing it back.

This is a subtrope of Cyberspace where it's widely known and used as a replacement for today's Internet by the public at large, not just by a few lucky hackers, discoverers, or inventors' friends.

Not to be confused with the Metaverse Web fiction, or the other world in Persona 5.