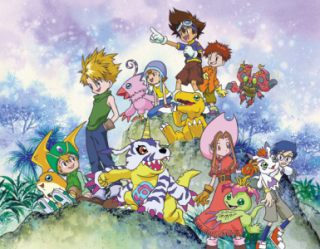 "In the summer of that year, strange things happened all over Earth."
Advertisement:

Digimon Adventure (known as season 1 of Digimon: Digital Monsters in English) is the first ever anime series in the Digimon franchise, which started off as an Alternate Universe to the first two Digimon manga, C'mon Digimon and Digimon V-Tamer 01. The story began with an animated movie that was released on March 6, 1999, then continued with a television show of the same name (the more well-known entry).

Seven ordinary kids are caught up in a strange snowstorm while attending summer camp and get sucked through a portal into the Digital World, a fantasy world populated by sentient monsters called Digimon. Armed with the mysterious "Digivices" and seven Digimon who are sworn to protect them, the kids try to survive in this new and exotic world until they can find a way home.

Over time, the kids slowly come to understand their role as the "chosen children", fighting not only a number of hostile Digimon but their own fears, insecurities and character flaws. However, when the conflicts in the Digital World spill over into the Human World, the stakes are raised and the kids must decide what they are willing to sacrifice if they want to Save Both Worlds.

The English dub had reruns on Nicktoons, referred to by the network and Saban Brands as Digimon Adventures. note potentially a blanket term for both Adventure and Adventure 02, as the Nicktoons site

lists information for Adventure but uses images of the kids in outfits used in 02. Saban promoted Digimon Adventures through the official Digimon Twitter,

The success of Digimon Adventure led to several sequels and adaptations:

See also: the character sheet. All tropes related to a single character should be added there instead of here.

The partner Digimon (minus Angemon) all evolve from champion to ultimate level.

The partner Digimon (minus Angemon) all evolve from champion to ultimate level.