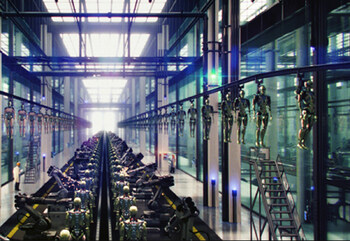 In fiction, robotic factory montages are sometimes added to showcase Special Effects or to establish Infinite Supplies so that the viewers can stop wondering, "Where did all that X come from?" Note: These are assembly lines made of robots, not necessarily assembly lines making robots. Also, these are usually done as a fleeting scene to indicate that it is not that important for the plot.