Scared of What's Behind You 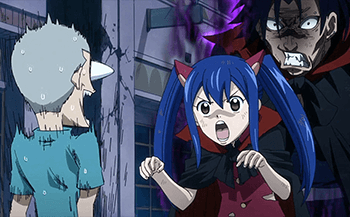 It's probably not the little girl making him react that way.
Advertisement:

This is a comedic trope where a character (usually The Hero) believes that they intimidated an enemy, usually complete with the hero getting cocky and/or grinning like a goof until they realize that what was truly scary was either a bigger fish, an Enemy Rising Behind, or The Cavalry arriving Just in Time to save them.

Depending on the situation, the hero's reaction is usually either an Oh, Crap!, or getting deflated about the fact that they're not as intimidating and badass as they thought.

Another variation is where a hero is trying to reassure a terrified bystander not to be afraid of them, only to turn around and see the real source of the bystander's fear.

If the party who sees the threat first reacts with aggression instead of fear, see Stab the Scorpion.

Related to and often overlaps with Always a Bigger Fish, but not always. May also overlap with Enemy Rising Behind in some cases. Compare and contrast Right Behind Me (though this can be used in conjunction with it). May involve Failed a Spot Check on The Hero's part if he really should have noticed something sooner than he did. Compare Framed for Heroism, Correlation/Causation Gag.