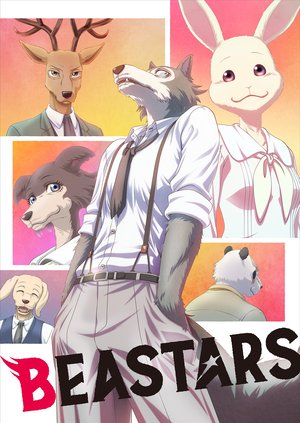 All I was talking about was music...and that's called jazz!
"I like tragedies. They make me sympathize with the characters...and they make me feel calm."
— Legoshi
Advertisement:

In a world of humanoid animals, carnivores and herbivores share a society where both sides strain against their natures. Herbivores must contain their constant fear of carnivores and struggle with their natural weaknesses, while carnivores must resist their violent impulses. Despite prejudicial tension constantly bubbling under the surface, laws and taboos help both subcultures coexist.

That is, until a student at Cherryton Academy, an alpaca named Tem, is found dead—mauled by a carnivore. And most have already pictured a prime suspect: Legoshi, a wolf with a menacing appearance that belies his kind heart and meek demeanor.

Fueled by a sense of justice and a desire to prove himself, Legoshi makes it his mission to expose the true killer, only to find not only his worldview changing but his relationship with both subcultures.

Written by Paru Itagaki and published in Weekly Shonen Champion from September 2016 to October 2020, Beastars (sometimes stylized BEASTARS) is a Shonen manga series based on Itagaki's previous work, Beast Complex. In December of 2020, Itagaki announced that Beast Complex will receive a serialization starting January 7th, 2021, which includes appearances of the characters from this manga.

The manga is notable for having sleeper hit status in Japan, as it was voted 2nd best manga in the 2018 Kono Manga wa Sugoi ranking, just behind The Promised Neverland. It also landed several Best New Manga awards upon release and even won the best Shonen Manga award in the 2018 Kodansha Manga Awards. The series is published in English by Viz Media and in French by Ki-Oon.

On February 4, 2019, it was announced that Beastars would receive an anime adaptation

Not to be confused with Beast Wars. Compare and contrast with Zootopia, which has a similar premise but very different themes.