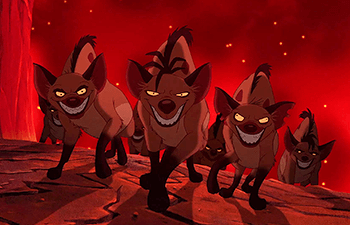 "Hyenas... I hate hyenas..."
Shenzi: Do you know what we do to kings that step out of their kingdom?
Simba: *scoff* You can't do anything to me!
Zazu: Uh, technically, they can. We are on their land.
Simba: But Zazu, you told me they're nothing but slobbery, mangy, stupid poachers.
Zazu: Ix-nay on the upid-stay...
Banzai: Who you callin' "upid-stay?!"
— The Lion King
Advertisement:

Hyenas are frequently portrayed as evil in fiction. They are often depicted as either insane Ax-Crazy sadists, as stupid Dirty Cowards, as a horrific Monster Clown, as a Super-Persistent Predator, or as the occasional Terrible Trio. The majority of the time, however, they're depicted as dirty, smelly Villainous Gluttons. These hyenas also have a fondness for laughing and a fear (and hatred) of lions.

Due to the omnipresence of this trope, good hyenas in fiction pretty much only exist as a deliberate subversion. Thankfully, these have become slightly more common in recent years, even though it is still somewhat rare. This trope does not only apply to actual hyenas, but humans or other creatures that use hyena symbolism; comparing a character with an unpleasant laugh to a hyena is particularly common in fiction, to the point that there's a trope named after it.

Fictional hyenas are mostly spotted hyenas; striped and brown hyenas are much, much rarer, and aardwolves (a purely insect-eating species) are still practically unheard of. This may be because the hyena's signature trait - that laughing sound - is actually only made by the spotted ones. Although when these other species do appear, they aren't always portrayed as negatively as the spotted hyena.

That's ironic, since the spotted hyena is the largest, strongest, and smartest hyena, very rarely scavenging, and living in large clans with a clear hierarchy. Despite this, it frequently clashes with Scavengers Are Scum; in Real Life, however, spotted hyenas are mostly hunters, and in the wild, lions will take any opportunity to steal kills from them and kill them as they are often rivals for territory. Contrast King of Beasts, Panthera Awesome, Noble Wolf, and Heroic Dog since hyenas are often made out as the Unpleasant Animal Counterpart to big cats and wild dogs. Compare The Hyena, which is a character who's constantly laughing (and who may or may not be a literal hyena).

After getting sprayed with the same ooze that transformed the Ninja Turtles, Harley gets mutated into a hyena.

After getting sprayed with the same ooze that transformed the Ninja Turtles, Harley gets mutated into a hyena.