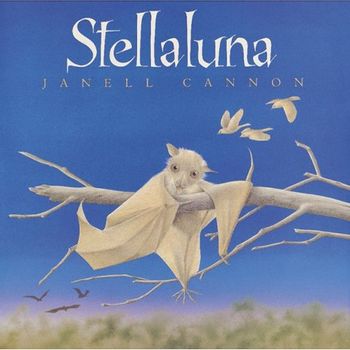 Stellaluna is a short children's book published by author/illustrator Janell Cannon in 1993.
Advertisement:

The story begins when a fruit bat pup named Stellaluna is separated from her mother in an owl attack. After a long fall, she lands in a songbird's nest. The mother bird reluctantly takes Stellaluna under her wing on the condition that Stellaluna behaves like a proper bird (sleeping at night, eating insects, etc), in order to keep her from being a bad influence on the mother bird's actual offspring. When Stellaluna grows up, she begins to notice the differences between herself and her adoptive siblings and realises that she is a fruit bat. The book ends on the note that even though their adoptive family may be outwardly different, they're family, regardless, and still very much the same at heart.

The story was later made into a Direct to Video animated movie in 2004 (with the titular character voiced by Chiara Zanni), which received a mixed critical response, as well as a Living Books interactive CD-ROM and a puppet show in Oregon. Another puppet show adaptation

was performed at "Speeltheater Holland" in the Netherlands in 2008.

The DVD adaptation provides examples of: