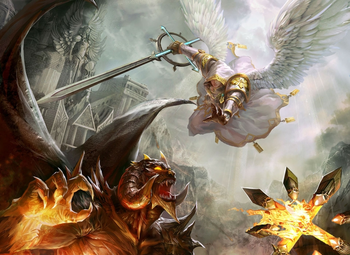 "The Great War, the Last Battle. Heaven versus Hell, three rounds, one Fall, no submission. And that'd be that. No more world."
— Good Omens
Advertisement:

Since Christianity is one of the world's largest and most pervasive religions, it should come as no surprise that one of its central tenets is featured in many works of fiction: the concept of a Heaven and a Hell. This doesn't mean that the works have to represent both sides in strictly biblical terms (or even name them as such), but should follow the traditional depiction of both sides.

One of the most common ways this appears is having the central plot resolve around an actual physical battle being fought between the two forces, usually The Armies of Heaven versus The Legions of Hell. Typically, this battle is being fought in secret while the rest of the world goes about their "happy" lives. The motives of both may differ slightly from work to work, but it generally revolves around wanting to Take Over the World. If this conflict does spill out into the world at large, you may be dealing with Hell on Earth or even Hell Invades Heaven. Granted, this conflict is typically a metaphor for Order Versus Chaos, but occasionally works will depict both sides as flawed or undeserving.

While the central conflict has its roots in Christian dogma (which actually got it from an older religion, Zoroastrianism, through its Jewish ties), and may even use names, places, and ideas straight from The Bible, expect the works to twist the concept to fit the storyline or the themes of the work. Also, expect lots of quotes straight from the good book and lots of traditional depictions of angels and demons.

Compare: Order Versus Chaos, Powers That Be, Harmony Versus Discipline, Balance Between Good and Evil, Light/Darkness Juxtaposition. For a battle between different Gods within or between pantheons, see Divine Conflict.

The Skellobits of the Underwhere (Hell) confront the heroes, but the Nimbis of the Overthere (Heaven), come to the heroes' aid.

The Skellobits of the Underwhere (Hell) confront the heroes, but the Nimbis of the Overthere (Heaven), come to the heroes' aid.