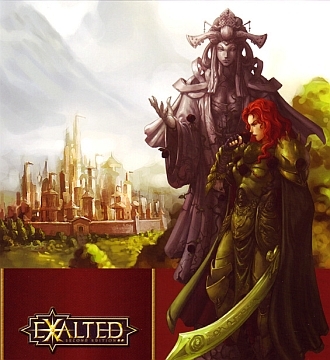 Exalted is a tabletop RPG by White Wolf set in a mythic fantasy world known as Creation. The player characters are the Exalted, epic heroes and demigods blessed with cosmic power to reshape the world to their will. There are many established kinds of Exalted, each one chosen by a different god, titan, or cosmic force, and each one with a different role.

The first Exalted were created at the hands of the gods to overthrow the Primordials, the tyrannical cosmic beings that created the world. The gods won, with the help of two Primordial traitors, Gaia and Autochthon. They slew some of the Primordials, while most were forced to surrender. The dead Primordials became the Neverborn, nightmarish creatures bound to sleep in the Underworld. Those who surrendered became the Yozis, crippled titans imprisoned within Malfeas, the world-body of their king. But the dead Neverborn put a final curse on the Exalted, dooming them all to succumb to hubris and madness.

The Solar Exalted were made rulers of the world, but slowly fell to the Great Curse, becoming depraved and heartless monsters mad with power. The Sidereal Exalted, blinded by the hubris of their curse, conspired against the Solars. They incited the Dragon-Blooded to overthrow their masters in the bloody conflict of the Usurpation, and imprisoned the Exaltations of the Solars, so that they could never again bless mortals with their power. The Lunar Exalted, the Solars' right hands, were chased to the fringes of the world, there to plot revenge against the usurpers. The Dragon-Blooded reigned over Creation, but could not defend it from the infinite hordes of Raksha, soul-eating faeries from beyond Creation, and the plots of the Deathlords, the ghosts of dead Solars in service of the Neverborn. Almost all Creation was destroyed, swallowed up into chaos as the Raksha invaded and the Great Contagion engineered by the Deathlords wiped out nearly all life.

The chaos ended when one Dragon-Blooded activated an ancient superweapon of the Solar Exalted, saving Creation and uniting it behind her. She would become the Scarlet Empress, founding a realm that would span most of Creation. But now, the peace she claimed is falling apart. The Scarlet Empress has vanished. The Raksha still creep across the borders of undefended Creation. And the Yozis and Neverborn have cooperated to free the imprisoned Solar Exaltations, stealing half of them to twist into their own dark champions. Harbingers of slaughter and entropy now stalk the land, while the champions of Hell seek to enact their masters' vengeance. And into the midst of all this, the Solar Exalted have returned.

This backstory would be bleak, forbidding, and generally depressing in any other setting, but the basic premise of Exalted is that you are a Hero, in a universe where heroes matter, and in fact are endowed with power to equal the rulers of the world. The Rule of Cool is the order of the day, and there is nothing you cannot do if you put some effort into it. In fact, the setting-function of the Primordial War is intended to show you that, given time and effort, you can overturn the foundations of the world and define your own reality.

Forthcoming is Exalted Essence, a corebook that will streamline the 3e ruleset and provide PC rules for all ten current Exalt types (Solars, Dragon-Blooded, Lunars, Abyssals, Sidereals, Alchemicals, Infernals, Exigents, Liminals and Getimians), and will exist alongside Third Edition.

See also Keychain of Creation, a long-dead Exalted Webcomic. Also see Chorus of the Neverborn, which is still updating at time of writing. See also Scion, which is basically diet Exalted meets American Gods IN AMERICA. See also Nobilis. See also the Old World of Darkness, which inspired parts of the game, and which previous developers once mentioned they would very much like to crossover with (though it's unlikely now).