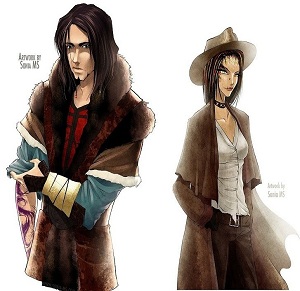 As the author, I see the two angriest people with an intense dislike for each other's races as the official couple. What's wrong with me?
"I am skilled and not unbloodied"- Toshiko Kikage before exile
"Red meets yellow..." "...kills a fellow" A bandit realizing what the Woman With No Name is before she finishes the statement for him, with example.
Advertisement:

is a Sourcebook written by Thrythlind intended for use by gamers. The sourcebook contains a two-three page discussion of several of the more common gaming systems and mechanics along with discussion of pros and cons. However, beyond that, there is no mention of statistics in the sourcebook.

The book contains sections on:

In addition to the sourcebook, there is a short story book which is the author's rendition of what would happen if you used his campaign with his characters played the way he would play them.

Note from the Author: I tend to use these pages as sounding boards for ideas as well as a form of self-promotion. For my original fictions, I do most of my troping on my own files offline, because I don't want to spoil anything...as I am want to do when ranting about my stories. However, currently most of the entries were done by me as part of a way of figuring out how to summarize the setting. From here on out, however, this page will be only occasionally updated by me specifically. (Though I might run a promotion that involves troping my stuff.)