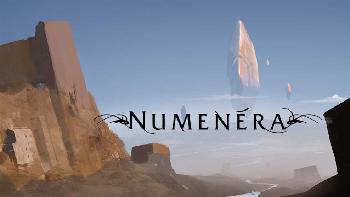 Numenera is a Science Fantasy Tabletop Roleplaying Game set on Earth one billion years in the future, after the fall of many, many future civilizations. A brainchild of the veteran d20 System designer Monte Cook, the game was crowd-funded via Kickstarter in August and September of 2012

and released on August 13, 2013. In April 2013, before the game was officially released, a separate Kickstarter campaign raised money for the February 2017 licensed computer RPG, Torment: Tides of Numenera, a Spiritual Successor to Planescape: Torment.

In the game's setting, eight great civilizations have risen and fallen, with the setting being what is called the "Ninth World". Although the current civilization is at a medieval level, the eight previous civilizations have left behind innumerable technological artefacts — machines collectively called numenera. To most people, the numenera are curious remnants of the past that are rarely understood, sometimes useful, often dangerous and usually thought of as magic. In the Ninth World, the future is built with the bones of the past — a past that is mostly unknown, yet always present.

Like most independent games of its era, Numenera focuses more on roleplaying and narrative than on combat and powergaming. As the player's guide itself says: "The key to playing Numenera is the story. The way to "win" this game is to come away with a great tale." Using the Cypher system, characters are created by having the player fill in three blanks in a simple sentence: "I am a (descriptor) (type) who (focus)." The descriptor is an adjective that describes the character, the type is the character class, and the focus is a verb that also describes the character in some way. Each of the three variables have their own effects on the character; for instance, a Tough Glaive who Rides the Lightning gains various bonuses to defensive stats, is skilled at physical combat, and can control lightning in various ways. Every challenge in the game, including combat, is treated the same way mechanically: a d20 is rolled against a set difficulty level, and if the die beats it, the player succeeds at the task. The player can influence the difficulty level by expending Experience Points or Cast from Hit Points, and the Game Master can intrude on player actions and cause unforeseen difficulties; the intention is to allow storytelling to flow organically from the system in this way.

A series of sourcebooks titled Arcana of the Ancients, funded by a successful Kickstarter campaign, serves as an official conversion of Numenera to Dungeons & Dragons 5th Edition.