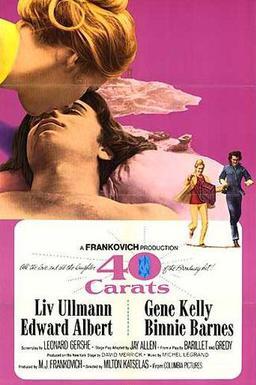 40 Carats is a 1973 romantic comedy film directed by Milton Katselas, based on the 1968 play Forty Carats.
Advertisement:

Ann Stanley (Liv Ullmann), a 40-year-old Norwegian-born divorcée who sells real estate in New York City, is on vacation in Greece when she meets 22-year-old Peter Latham (Edward Albert). They enjoy a one-night stand before she returns to America, expecting never to see him again. Back at home, where she lives with her English mother Maud Ericson (Binnie Barnes) and her seventeen-year-old daughter Trina (Deborah Raffin), she is shocked when Peter shows up at her apartment as Trina's date. But Peter isn't really interested in Trina - he loves Ann, even though she's mortified at the thought of entering an Age-Gap Romance. In a subplot, Ann's customer J.D. Rogers (Billy Green Bush) seems to be flirting with her, but is really in love with Trina.