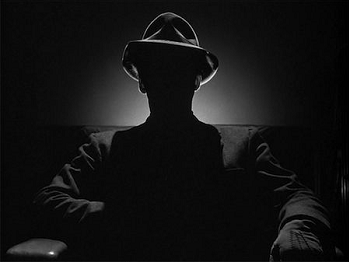 Mayor: What do we got?
Jim Gordon: Nothing. No matches on prints, DNA, dental. Clothing is custom, no labels. Nothing in his pockets but knives and lint. No name... no other alias.
— The Dark Knight, regarding The Joker
Advertisement:

Nothing Is Scarier than someone you know nothing about. He has nothing to identify him, nothing that even states that he is real. If this person simply disappears, you are terrified because you don't know if he is watching. Sometimes he is established as a myth, a ghost story to scare people. This person lacks not only a past, but also a present and a future. He just is, and you don't know why.

The Spook is someone whose identity is a paradox, they exist but don't exist at the same time. No one can prove that he is there except by showing someone the warm body, if you even have it. If a name is given it is likely to be Shrouded in Myth; you can't be certain of anything you hear about them but you don't want to underestimate them all the same. Or they may use an obvious pseudonym like Mr. Smith.

In some cases, this may overlap with a Legacy Character: the myth is more important than the person.

All There in the Manual may have extra information that is confirmed by Word of God, but that doesn't count: this is about how this character is perceived by others. What matters is how the characters in the story behave in regard to the stranger. If the people in the story know all about the character, then it does not qualify as The Spook even if the audience knows nothing.

This kind of character is often seen as either an Enigmatic Minion, or the guy the villains (or even the heroes) bring in to do the job right... even if they don't know what they're dealing with. Also frequently The Nondescript.

The reason The Spook is such a mysterious character is that the story treats the lack of information of the guy as a mystery, i.e attention is drawn to it and in universe characters point them out and become curious. If this doesn't happen, he's probably just a Bit Character that isn't intended to be memorable.

Compare The Faceless, but The Faceless is only important based around the eventual reveal (whether or not they actually have a face). The Spook will usually remain an enigma even if caught and defeated. Also compare The Men in Black, who are often mooks with this characteristic, and The Cowl, when a hero tries to be this to the villains. The Chessmaster can sometimes be a Spook and combined with this trope makes them all the scarier. Finally, compare/contrast Un-person, where someone else does this to a person as a form of punishment. See also Outside-Context Problem, which appears out of nowhere, and Diabolus ex Nihilo, a villain without any backstory.

Not to be confused with the word's use as a slur towards black people, nor its philosophical sense (mainly in association with certain branches of anarchism and nihilism) referring to abstract social constructs.