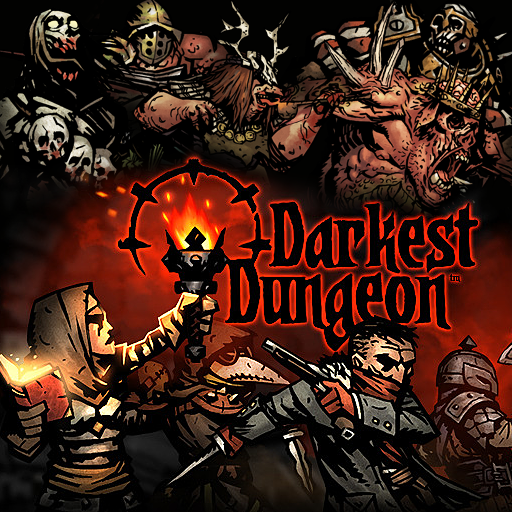 Ruin has come to our family.
"You remember our venerable house... opulent and imperial. It is a festering abomination! I beg you, return home! Claim your birthright! And deliver our family from the ravenous, clutching shadows... of the Darkest Dungeon."
— The Ancestor

Darkest Dungeon is a challenging Gothic Horror Dungeon Crawling RPG about the stresses of dungeon crawling, developed by Red Hook Studios. You are the heir of a former noble family, damned due to the actions of a hedonistic relative who spent the family fortune excavating an ancient portal underneath the family estate and inadvertently releasing an untold number of Eldritch Abominations. Your goal is to drive back these horrors and redeem the family name.

You will send out teams of recruited heroes on a perilous side-scrolling descent, dealing with a prodigious number of threats to their bodily health, and worse, a relentless assault on their mental fortitude! Five hundred feet below the earth you will not only fight unimaginable foes, but famine, disease, and the stress of the ever-encroaching dark. Darkest Dungeon focuses on the humanity and psychological vulnerability of the heroes and asks: What emotional toll does a life of adventure take?

On April 2020 they announced a new free DLC pack for the game, The Butcher's Circus, which features a new biome and player vs player combat. It was released on May 28, 2020.

The Darkest Dungeon 2 Sequel was announced

Darkest Dungeon: The Board Game miniature game in late 2020.

For tropes related to Marvin Seo's custom classes and other mods, see this page.

Not to be confused with Dark Dungeons, the original comic book by Jack Chick and its film adaptation.

In time, you will know the tragic extent of these tropes:

The Color of Madness DLC contains examples of: