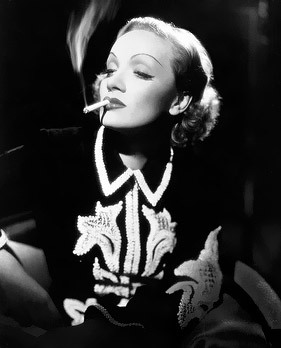 Sexy on the outside and certainly not on the inside.
Advertisement:

When Smoking Is Glamorous, it is portrayed as something stylish, or even sexy. It's something The Beautiful Elite do.

Of course, this was prevalent in old Hollywood when Everybody Smokes, and since the actors were glamorous, it made smoking look so. The main use today is The Vamp in a Film Noir movie smoking in a seductive manner. Marlene Dietrich, Humphrey Bogart, Lauren Bacall, James Dean, Rita Hayworth, Bette Davis, Sean Connery, Frank Sinatra, Bing Crosby and Audrey Hepburn are the most iconic glamorous smokers of the Golden Age of Hollywood. Whenever a Shout-Out is provided to glamorous smoking in old movies, it's bound to be to one of them.

Today, it's largely a Discredited Trope, with some exceptions. Also subject to some Values Dissonance in that smoking tobacco falls into this trope whereas smoking of other substances, particularly marijuana, often averts the trope, though some reversal has happened in recent years as pot is treated as the more glamorous and "cool" option.

This trope is often the basis of temptation for Sitcom teenagers to try/think about/start smoking. Peer pressure wouldn't work if the kids doing the pressuring didn't look cool or "glamorous", right? Usually, a Very Special Episode coupled with an Anvilicious lesson about the dangers of the tobacco habit.

Compare Smoking Is Cool (smoking as an indicator of a badass), Smoking Hot Sex, Wine Is Classy.