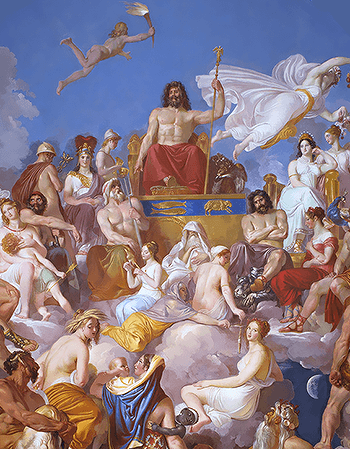 Zeus on top of Mount Olympus.
"Come, try me, immortals, so all of you can learn.
Hang a great golden cable down from the heavens,
lay hold of it, all you gods, all goddesses too:
you can never drag me down from sky to earth,
not Zeus, the highest, mightiest king of kings,
not even if you worked yourselves to death."
— Zeus, The Iliad book VIII (translation by Robert Fagles)
Advertisement:

In a setting with a few or more gods, there is often one who stands above all the others. Academics call this henotheism.

This god is usually one of the following:

Sometimes, there may be both types in the same setting. In that case, the one (or several, if there are multiple pantheons) King of the Gods is still below the God of Gods. A Sub-Trope to Stock Gods. A God of Light is a common choice for this role, especially when specifically a solar deity.

If there's an entire class of beings that are Above the Gods, see The Old Gods or in certain cases, Powers That Be.