Literature / Job: A Comedy of Justice 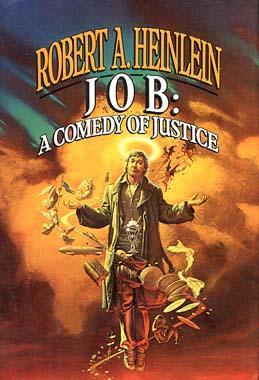 Job: A Comedy of Justice is a novel by Robert A. Heinlein, first published in 1984.
Advertisement:

Alex Hergensheimer, pastor and manager of the 'Churches United for Decency', takes a relaxing vacation in the South Seas. But after he accepts a bet and walks across hot coals, he's astounded to realize that everybody thinks he's Alec Graham... and even more astounded to discover that 'Alec Graham' is a money-launderer working for The Mafia. And then things start to get weird.

A farcical and sometimes thoughtful re-interpretation of the Biblical Book of Job, which seems to be the misadventures of a dimension-skipping Cosmic Plaything - who would really rather be running an ice cream shop with his beautiful (but Asatru) One True Love. But all these trials turn out to be a Secret Test of Character with several twists at the end.