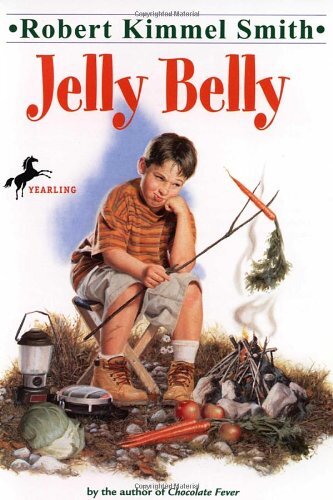 Jelly Belly is a 1981 YA book written by Robert Kimmel Smith. The protagonist is Nathaniel "Ned" Robbins, an 11-year-old boy who loves to eat and weighs over 100 pounds. Sure, he's on a strict diet but he still isn't losing weight due to constant cheating. His parents decide to send him to a summer diet camp, hoping he'll have better luck there than at home.
Advertisement:

Ned is horrified by Camp Lean-Too's strict policies, but soon finds he's not alone: Richard Napoli, Darryl "Hog" Hawkins and Max Cohen are veterans of the camp who are more than happy to help Ned through the hard times ahead. Together, the four boys find ways to cheat the system and indulge themselves without getting caught. Somehow they all manage to lose weight despite their candy bar binges and stolen cheese sandwiches from the camp kitchen.

The real trouble starts when Ned realizes he wants to lose weight the right way, but it's not going to be easy with Grandma always cooking up her delicious, fattening meals and confections. But when there's a will, there's a way.

May have been the inspiration for the 1995 film Heavyweights.

This story contain examples of: