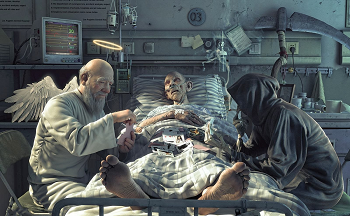 Game of Life by Hu Zheng

"I like, at times, to hear The Ancient's word,
And have a care to be most civil:
It's really kind of such a noble Lord
So humanly to gossip with the Devil!"
— Mephistopheles, Faust: First Part of the Tragedy
Advertisement:

Basically, depictions of God and Satan or general equivalents to them as friendly towards each other, or at least allied rather than antagonistic.

See also Go-Karting with Bowser, where this trope derives its name. See also Satan Is Good, God Is Evil, God and Satan Are Both Jerks.