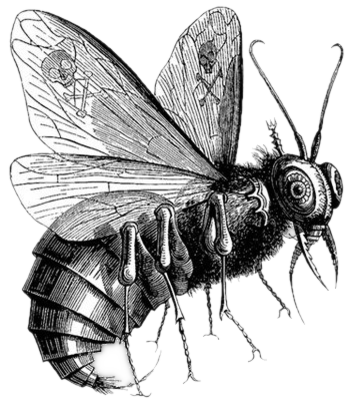 Beelzebub as depicted in the Dictionnaire Infernal.
"Every kingdom divided against itself will be ruined, and every city or household divided against itself will not stand. If Satan drives out Satan, he is divided against himself. How then can his kingdom stand? And if I drive out demons by Beelzebul, by whom do your people drive them out? So then, they will be your judges. But if I drive out demons by the Spirit of God, then the kingdom of God has come upon you."
— Jesus Christ, Matthew 12:25-28, The Bible
Advertisement:

Beelzebub: Lord of the Flies, Prince of Hell and Patron Demon of Gluttony.

Originally a Philistinian god worshipped in Ekron, Beelzebul was adopted through cultural osmosis as a major demon to the Abrahamic faiths. He is often called a "Prince of Demons" by the Hebrew faith, his name deriving from Ba'al Zebub, literally translating to "lord of the flies". To demonologists, Beelzebub is one of the Seven Princes of Hell, acting as the personification of the sin of gluttony and diametric opposite to Cassiel, Archangel of the virtue of temperance.

In modern times, Beelzebub is arguably one of the most famously depicted demons in pop culture. Much like in the theology that he sprang from, pop culture often makes Beelzebub and Satan interchangeable, either having Beelzebub be an alternate name for the Devil himself, the closest thing to a Devil we see or one of Satan's most trusted (or least trusted) underlings.

As he is the Lord of Flies, he is often associated with crawling, creeping, flying, biting little critters that spread disease and inject venom, with Beelzebub being portrayed either as a bug himself or some kind of Plaguemaster and Pest Controller.

Sub-Trope of Demon Lords and Archdevils. Related to Asmodeus, Baphomet and the Seven Deadly Sins.