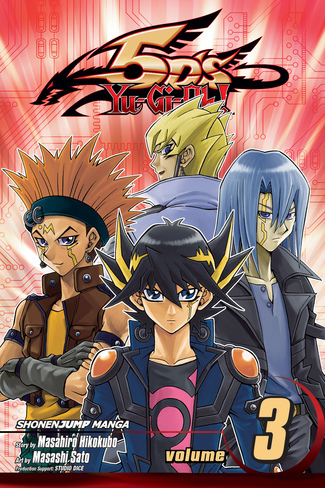 This work covers the manga. For the anime, see Yu-Gi-Oh! 5Ds.

Yusei Fudo is a powerful duelist living in Satellite. After having a friendly duel with his friend Sect Injuin, a mysterious being called The Skeleton Knight appears and kidnaps Sect forcing Yusei to duel the knight to save his friend. While heading to the hospital to help Sect who was injured in the duel, Yusei is attacked by Jack Atlas who forces him into a duel. Despite his best efforts, Yusei loses the duel and becomes frustrated due to his loss. Yeager appears and offers Yusei a chance to face Jack Atlas again by entering the D1 Grand Prix. Yusei wasn't sure about entering the tournament at first but he changed his mind after meeting Aki Izayoi. Yusei enters the D1 Grand Prix in hopes of getting another chance to duel Jack Atlas once more. However sinister things are happening behind the scenes...

Published in Shueisha's V-Jump in Japan and Shonen Jump in US before its cancellation, the manga is based off of the anime and although it features the same cast, the storyline is completely different.

The manga is written by Masahiro Hikokubo and supervised by Kazuki Takahashi. It ran from August 21, 2009 to January 21, 2015, spanning a total of 66 chapters compiled into nine volumes.