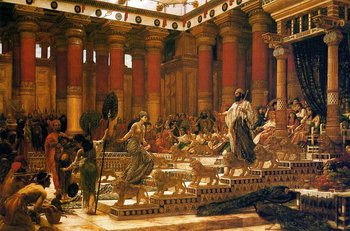 "We now take you back through the ages. To a time before TV, before cowboys, before dinosaurs. The time of the Bible!"
— Homer Simpson, The Simpsons, "Homer and Ned's Hail Mary Pass"
Advertisement:

Home to staff-wielding doom-croaking prophets, Philistines, miracles, and loads of people in big robes who sit tableau-like around tables or rocks, looking awe-filled and reverent. It may sound simple on paper, but ”Biblical Times” is a very nebulous label, and trying to reconcile religious stories with historical fact is a notoriously tricky business.

To start with, the dates and accuracy of many biblical events are hotly disputed. The Israelite Exodus, for instance, has been traditionally dated to around 1400 B.C.E., give or take a few centuries. However, since there are no records of the Exodus besides the Bible itself (barring some really specious readings of the expulsion of the Hyksos from Egypt around 1550 BCE), the majority of secular and religious scholars agree that it never actually happened, or at least nowhere near how the Book of Exodus describes it. The rest of the Old Testament dates from roughly 1000 B.C.E. to 500 B.C.E., and the New Testament places the death of Jesus around 30 C.E. Keep in mind though, that it's unlikely any of these dates are completely accurate, due to the millennia-long game of telephone that has been played with Biblical translations, conversions between different calendar systems over the years, and that many stories were likely transmitted orally for a long time before being written down.

Place can also be as diverse a factor as time. Although events are usually centered around the area of Ancient Israel - Jerusalem, especially - they typically overlap with the timelines of many other civilizations, including Ancient Egypt (Book of Genesis and Exodus, particularly Moses), Ancient Babylon and Persia (Ezra, Daniel and Esther), Ancient Greece (parts of the Deuterocanonicals/Apocrypha), and Ancient Rome (the entire New Testament, especially Jesus Christ).

Since The Bible covers such a broad span of time, this Trope is much more useful as a determiner of location and setting rather than actual time period; Moses was about as ancient a figure to Jesus as Jesus is to us.

If Time Travelers go back to one of these periods, they will probably have Adventures in the Bible.