Film / From the Manger to the Cross 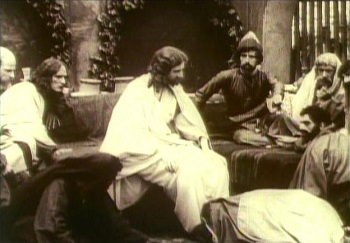 From the Manger to the Cross (1912) is, as the title indicates, a story of the life of Jesus, directed by Sidney Olcott, and written by Gene Gauntier, who played Mary and was one of Hollywood's first female screenwriters.

The film is a rather boilerplate dramatization of the life of Jesus, starting with the Christmas story, going through his ministry, and ending with his crucifixion. Two things make this film stand out. First, it was 71 minutes long, and as such is not only the first feature film about Jesus Christ, it is one of the first feature films made anywhere, period (if one defines a "feature" as at least an hour long). Second, parts of the film were shot on location in Egypt and what was then the Ottoman Empire's province of Palestine. When Joseph and Mary flee in to Egypt with baby Jesus, they pass the Pyramids and the Sphinx, and when Jesus enters Jerusalem, he passes through the Lions' Gate of Old Jerusalem.

Most of the tropes below are also found in The Four Gospels.