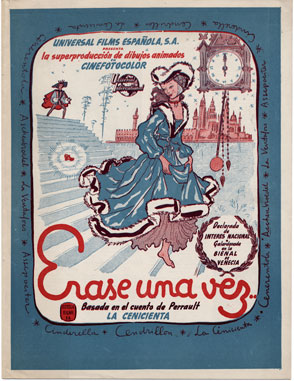 Released in 1950, Erase una vez... (Originally known as "La Cenicienta") was a Spanish animated movie based of the fairy tale Cinderella...which unfortunately, was around the same time Disney released their version of the story.

When first released, the film was deemed worthy of national interest and won a Venetian film festival, but due to the legal complications with Disney, was never commercially released and appears to be a lost film, though a black and white copy can be seen at the Spanish Cinema Museum.

Since 2015, the Filmoteca de Barcelona has currently working for a full restoration of the film in color.

The full black and white version is finally viewable at Dailymotion: Part 1