Film / From Justin to Kelly 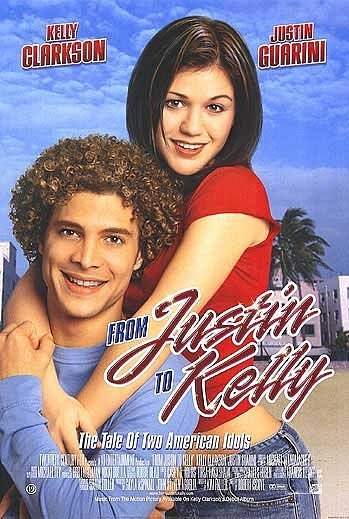 From Justin to Kelly is a 2003 film that is a VERY loose adaptation of American Idol.

After the first season of American Idol proved a massive success, the network executives began to think of other ways to milk the brand for all it was worth. What they decided to do was adapt what is essentially a karaoke talent show into a musical beach comedy film starring the contractually obligated winner and runner up of American Idol's first season, Kelly Clarkson and Justin Guarini. Clarkson plays Kelly Taylor, a cautious Texan waitress going to Florida for spring break with her two friends. Guarini plays Justin Bell, a "wild" college student from Pennsylvania who, with his two friends, run a party service and are also going to Florida for spring break. Justin and Kelly meet and quickly fall in love but struggle with their differences and the manipulations of Kelly's jealous friend.

Subplots include Justin's friend Eddie trying to find a girl he met on the internet, Kelly's friend Kaya falling for a local busboy, and Justin's friend Brandon constantly getting in trouble with a policewoman.

Regarded as one of the worst movies ever made, the film failed miserably with both the box office and with critics, so much that the studio got in trouble with theaters due to how fast they tried to put the film on home video (at the time, it was the fastest movie to transition from theaters to home video at only 28 days). Additionally, the film's soundtrack was never officially released due to how poor the reception was.