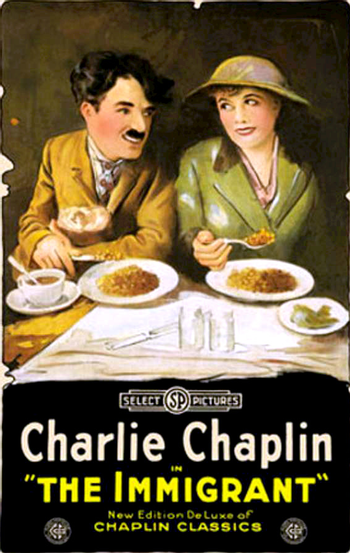 The Immigrant is a 1917 short film by Charlie Chaplin. The film opens with Chaplin's Tramp as an immigrant on a ship sailing to New York. He strikes up an acquaintance with a pretty girl (played by his regular female lead, Edna Purviance) who is on the voyage with her sick mother. The Tramp tries to slip the girl a little money but is mistaken for a pickpocket. The girl clears his name and they part on good terms.

Later, after arriving in New York, the Tramp finds a coin and decides to splurge on a decent meal. Unfortunately for him the coin falls out of a hole in his pocket. Hilarity Ensues as the Tramp tries to obtain another coin and pay for a meal. While trying to avoid the intimidating waiter he meets the girl he met on the boat. The Tramp is about to take a beatdown from the waiter when he steals a tip and uses that to pay for his meal. After leaving the restaurant the Tramp and the girl go off to get married.

Outtakes included in the documentary series Unknown Chaplin reveal that Chaplin began with the café scene, improvising and evolving the humor until he was satisfied with it, and then worked backward, adding the immigration plot in the first reel, to explain where the Tramp and the girl had come from.

Not to be confused with the 2013 film of the same name, starring Marion Cotillard and Joaquin Phoenix.

Inducted into the National Film Registry with the class of 1998. The film can be seen here