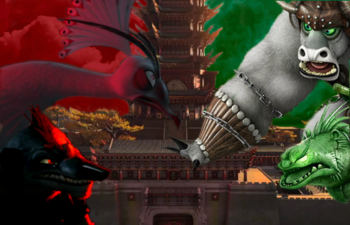 Shen vs. Kai: When Evil Collides

is a What If? fic for Kung Fu Panda created by Berserker88

and later co-authored with Mind Jack

. Taking place during the events of Kung Fu Panda 2, the fic follows the events of canon, with Big Bad Lord Shen creating an unstoppable new weapon, invading Gongmen City, and plotting the conquest of all of China. The heroes of the Jade Palace set out to stop him, as per usual.

And that's where Kai comes in.

The tides of fate have suddenly gone out of whack and the Maker of Widows has broken out of the Spirit Realm much earlier than he should have, now leaving the heroes with two villains to contend with. Luckily for them, the baddies are more interested in removing their competition so they can have China all to themselves. This quickly results in one hell of a chaotic situation and multiple levels of Mind Screw.

Shen vs. Kai: When Evil Collides provides examples of: