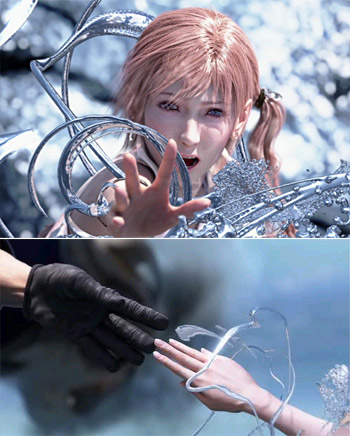 Elan: OK, I'll help you up, if you promise to surrender.
Nale: Fine! Whatever! Just be careful, my hands are still slippery with your blood.
Elan: You're not making me feel better about this decision.
— The Order of the Stick
Advertisement:

Take My Hand moments happen whenever a character is about to fall off a cliff, into a Lava Pit, or out of a speeding car and another one tries to catch their hand. First, it's not granted that their hands will reach at all. Second, even if they do grasp hands the audience is kept wondering for several seconds if the rescuer will be able to pull the falling character up or if their hand will slip. The whole act is typically accompanied by phrases like "Don't give up!" and "I'm not going to let you fall!", and occasionally a slow-motion shot of slipping fingers. Such moments are primarily used in thrillers and action movies to pump up the suspense.

Physically, it's pretty hard to lift someone up over a cliff with one hand if you don't possess Super Strength. Sometimes, however, the rescuer remembers that humans usually have two arms and puts their second one to use, making the feat of hauling 100 to 300 pounds up a bit more plausible. Often, the use of only one hand is justified by making the rescuer hold onto something with the other one themselves. The falling character not using the other hand is justified by default, since when you are hanging from one hand, your other shoulder is inevitably several inches below the other, so the other hand simply won't reach up.

Another practical suggestion would be to grasp a person's wrist rather than their hand for a much surer hold. But for some reason, it's only done in the films to make the process of hands slipping out of grip more dramatic: first the wrist grip slips, then the palm, then a few fingers... and then the character the hero was trying so hard to save falls to his or her death.

This trope is not limited to physical contact: any sequence where a character bails another one out of impending danger in an inconceivably dramatic way can be considered an example. Compare Catch a Falling Star; contrast with Unhand Them, Villain!. If the characters are not in a dangerous situation, it's Offering a Hand.

Watch out for spoilers, as these examples will often divulge details on the fates of major characters.