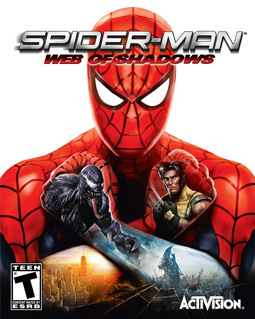 Red or Black, the choice is yours.
Advertisement:

The game takes notes from the Wide-Open Sandbox of Spider-Man 2: The Game, ironing out the flaws introduced there and adding an evolving environment that gradually turns New York's appearance into that of a symbiote entrenched alien world. The gameplay involves an in-depth combat system similar to Spider-Man 2's as well as changes in web-swinging mobility that actually allow aerial battles and wall-crawling battles to be fun. The Symbiote Suit/Red Suit duality is back from Spider-Man 3, with each suit having its own distinct playstyle and with the ability instantly change between them even in the midst of battle to switch up combos. The variety of combat options and the ease in switching between the different modes of combat means battles are extremely dynamic.

The game was often touted by advertisements and previews as delivering the "complete" experience of being Spider-Man. The console game is considered one of the best Spider-Man games in recent history to fans, but most critics found it So Okay, It's Average due to graphical and sound flaws, as well as repetitive main- and side-quests.