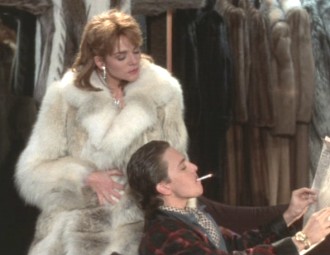 Romance, magic, and goofing around.
Advertisement:

Mannequin is a 1987 romantic comedy written and directed by Michael Gottlieb, about a new employee (Andrew McCarthy) at a struggling old department store who discovers that one of their mannequins (Kim Cattrall, later star of Sex and the City) comes alive, but only when they are alone (it is actually an ancient Egyptian princess under a curse.) They fall in love and, with her help, he revitalizes the store thanks to the crazy window displays he designs. Meshach Taylor (of Designing Women) plays the supporting role of Hollywood and G. W. Bailey does his usual schtick as Security Captain Felix.

This is 1980s High Concept, that still never tries to be anything other than silly and fun.

Though apparently based on an episode of The Twilight Zone (1959), the director insists he just came up with the idea after seeing an optical illusion in a store window that made one of the mannequins appear to move. It also shares striking similarities with the 1948 film One Touch of Venus, in which a statue of the goddess comes to life when kissed by a young window dresser.

There was also a sequel released in 1991 called Mannequin 2: On the Move. It stars William Ragsdale and Kristy Swanson, and Meshach reprises his role as Hollywood.