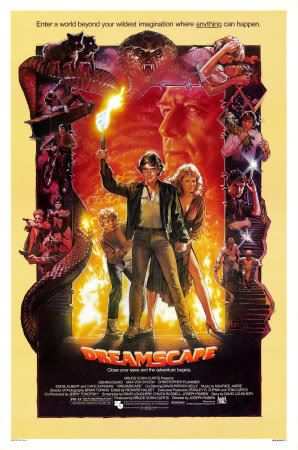 Dreamscape is a Science Fiction film directed by Joseph Rubin and starring Dennis Quaid. The film was released in the United States in 1984 by 20th Century Fox.

Alex Gardner (Quaid) is a man with special talents — psychic talents, to be exact. While participating in ground-breaking studies on the powers of the mind at the age of 19, he suddenly quit and attempted to disappear, from then on only using his abilities for petty personal gain. Years later, his extraordinary "good luck" both at the race track and with the ladies has drawn the attention of unsavory eyes... and now he and his talents are in high demand by everyone from local gangsters to shady government agents.

When Alex is contacted by the college professor that performed the studies on him years ago, Alex agrees to hear him out, both for old times sake and to have a place to momentarily hide from everyone who wants a piece of him. When the professor explains what he's working on — a project that will allow those with psychic abilities to enter the dreams of others — Alex is intrigued, and with a little "convincing" agrees to help out. With the professor's assistance, Alex is quickly able to master the ability of entering, observing, and even modifying people's dreams. At first he feels exhilarated, intoxicated by the freedom and power that come along with his new-found ability. However, things are not quite what they seem... inside the Dreamscape, Alex finds that he is facing progressively more dangerous nightmares, and outside he must deal with the schemes of not only a rival psychic, but also of the shadowy machinations of the people who are truly behind the Dreamscape project.