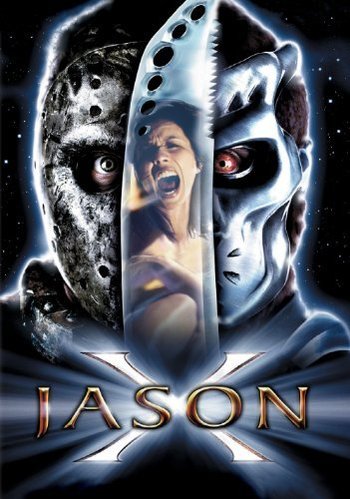 Let the bodies hit the floor!
"Evil gets an upgrade."
— Tagline
Advertisement:

Jason X note that's the letter X, not the Roman numeral for ten is the tenth Friday the 13th film. And it's JASON IN SPACE!

The United States government has finally captured Jason Voorhees, but only after he racks up well over two hundred murders. Every method of execution fails to kill Jason for good, so the government decides to put him into cryogenic suspension until someone can figure out what to do with him. Thanks to the interference and incompetence of the US military, who wanted to keep him unfrozen and study his regenerative capabilities, Jason almost escapes captivity. Rowan, the scientist in charge of deep-freezing the Crystal Lake Killer, manages to lock him up in a cryogenic chamber—though Jason dooms her to the same fate by shoving his machete through the chamber and into her. As the two of them go into deep freeze, the room holding the chamber enters full lockdown. With everybody in the base dead, it is lost…

400 years later, a group of students from the spaceship Grendel find the frozen pair during an archaeological trip to the now-abandoned Earth. The Grendel crew revives Rowan via advanced medical technology; Jason thaws out on his own during an autopsy. After Jason rises from the operating table, he starts killing everyone he can find—and even though killing people is as easy as it ever was, the future still has a few surprises in store for Mr. Voorhees.

Jason X closes out the original continuity of the Friday the 13th film franchise that started with Friday the 13th (1980). Two different continuations of this film exist:

In terms of the film franchise, Freddy vs. Jason followed this film, and the 2009 reboot followed that. As such, Jason X is also the last standalone Friday the 13th film of the original continuity, as well as the final film to feature Kane Hodder as Jason.

The novels contain examples of these tropes: