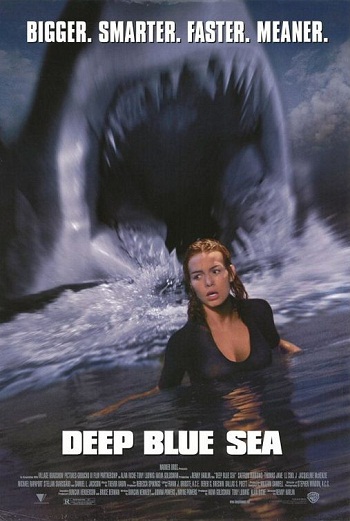 Harder. Better. Faster. Stronger.
"So here's the riddle. What does an 8,000-pound mako shark with a brain the size of a flathead V8 engine and no natural predators think about?"
Advertisement:

Dr. Susan McCallister, her team of scientists, and shark wrangler Carter Blake are researching a cure for Alzheimer's in a refurbished WWII Submarine refueling platform, using sharks to grow a protein that reactivates dead human neurons. However, the sharks' brains were too small, and the amounts of protein harvested were so small as to make the efforts unviable, so they use genetic engineering to give them larger brains. They kept the sharks corralled in an unbreakable mesh cage submerged in the ocean along with their labs. What Could Possibly Go Wrong?

After one of the sharks escapes and causes a PR fiasco, Russell Franklin, the CEO of the company funding their research, comes in to inspect their progress and see if they should be funded or shut down. Of course something Goes Horribly Wrong.

Not to be confused with The Deep Blue Sea, which is a 2011 romantic drama film.

The movie has the following tropes.

[after killing all the sharks]
Carter: Tell you what man, I quit this job.
Preacher: Oh, take me back to the ghetto.
Carter: Amen.
[ending credits theme kicks in]