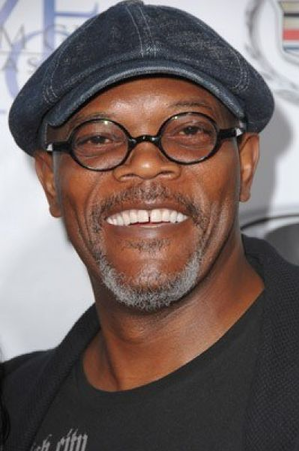 Smiling motherfuckerly.
"Samuel L. Jackson has appeared in every movie ever made, including all those to be made in the future. If you're working on a funny little home movie with your buddies, Samuel L. Jackson will show up at some point onscreen. If you accidentally leave your camcorder on, he'll end up in front of it. And in homes all over the world, young couples are staring in confusion at their nannycam as Samuel L. Jackson shows up to berate the babysitter."
— Jerusalem

Samuel Leroy Jackson (born December 21, 1948 in Washington, D.C.) is one of the top leading men and supporting actors in Hollywood today. If you see a badass Scary Black Man with No Indoor Voice in one of your favorite films, chances are good that this guy's playing him (and will likely give you a few lines to remember for ages).

Not to be confused with Laurence Fishburne. According to both actors' IMDB entries, this happens frequently, in both directions. Jackson himself

acknowledges that he and Fishburne were even mistaken while standing next to each other, but that also "I've been every famous black guy", including Morgan Freeman.

And, for God's sake, don't try to portmanteau his first name and middle initial together, creating "Samuelle Jackson." It never ends well. Though "Mr. Jackson" is entirely appropriate.

For those who still believe that being a nerd and being a badass are two unrelated concepts, he's a big fan of anime, videogames, manga and comic books. He is known to collect action figures that depict characters that he has portrayed, including Jules Winnfield, John Shaft II, Mace Windu and Frozone. Oh, and Nick Fury too.

As one might guess, he is a living Fountain of Memes.

Unsurprisingly, he is an element on the Periodic Table of Awesoments

Jackson is also one of those lucky Hollywood few who is Happily Married: he has been married to LaTanya Richardson, whom he met at Morehouse College, since 1980.

Never let him read a mature parody of a children's book.

He also did an anti-gun violence PSA, which can be found here

, and pro-Obama commercial for the 2012 Presidential campaign.

Enough is ENOUGH! I have HAD it with my MOTHERFUCKIN' TROPES on my MOTHERFUCKIN' PAGE!
Edit this page AGAIN! I dare you! I double-dare you, motherfucker! EDIT THIS TROPE PAGE ONE MORE GODDAMN TIME!