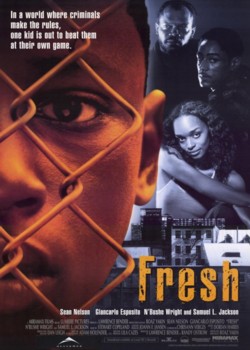 Made in 1994, this very grim crime drama is written and directed by Boaz Yakin and stars Sean Nelson as its titular protagonist.

Fresh is a young black genius living with his saintly aunt and eleven other children in a New York City neighborhood. Fresh's life is disrupted by the drug trade in several ways: working for the kingpin Esteban (Giancarlo Esposito) makes him chronically late for school, his beloved sister Nicole (N'Bushe Wright) is an addict, and gunfights break out where school kids play. Fresh's father Sam (Samuel L. Jackson) is a caustic chess champion whose way of relating with his son is to berate him for imperfect play. Eventually, Fresh loses too much and the time comes for him to play the dangerous adults he's working for against one another, with the goal of escaping that life at all costs.