Film / Freedom on My Mind 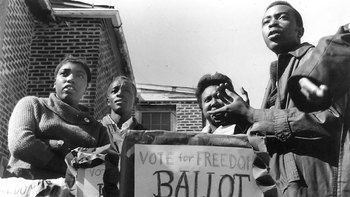 Freedom on My Mind is a 1994 documentary film directed by Connie Field and Marilyn Milford.

It is a history of the civil rights movement in Mississippi, 1961-1964. In Mississippi, perhaps the most racist and definitely the most segregated of the 50 United States, black people from around the state rise up in the early 1960s and demand the right to vote. White people in Mississippi resist violently. Herbert Lee, a black sharecropper, attempts to register to vote but is murdered by a white Mississippian who is also a member of the state legislature; the white man is acquitted.

(SNCC) enters Mississippi and begins working to gain civil rights for black Mississippians. Progressive young white students from across America come to Mississippi to help the movement, and they do, but not without conflict from black people native to the state. Three civil rights workers are murdered