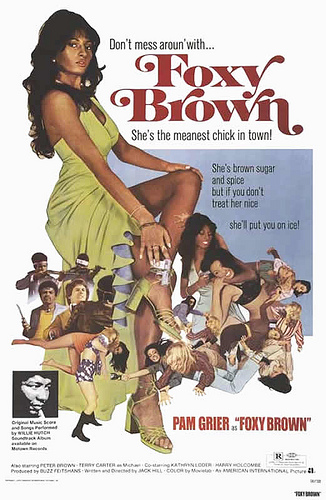 Foxy Brown is a 1974 Blaxploitation film, one of the first to feature a strong female lead—specifically, Pam Grier, the original Action Girl. Following the success of its spiritual predecessor, Coffy, writer/director Jack Hill wanted to create a sequel that would star Pam Grier reprising her famous role. The working script, titled Burn, Coffy, Burn, was changed at the last minute when American-International Pictures decided they didn't want the movie to be a sequel. The script was quickly rewritten, and Foxy Brown was born.

Foxy Brown's boyfriend, Dalton Ford, recently worked undercover to expose a local crime ring. The movie opens shortly after he receives plastic surgery, and he's all set to retire under his new identity, Michael Anderson. Unfortunately, Link Brown, Foxy's drug dealing brother, recognizes Michael for who he is and exposes him to the mob in exchange for leniency regarding his own indescretions. The mob has Dalton/Michael murdered, and Foxy Brown poses as a High-Class Call Girl to get her revenge against and take down the creepy white couple who run everything.

Not to be confused with the rapper of the same name.